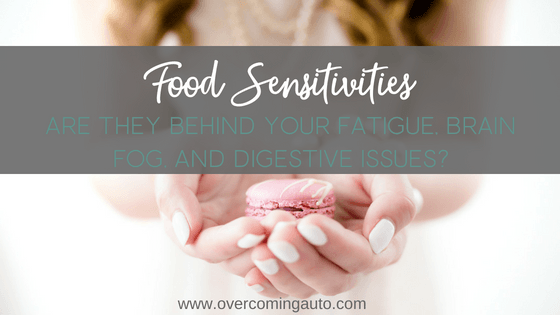 Does any of this sound familiar? You find that you get frequent migraines for no apparent reason. Or you experience embarrassing gas and bloating after meals.  Maybe you have eczema, unexplained rashes or acne (and you're definitely not a teenager anymore!) And let’s not forget about fatigue. Not just the kind of fatigue you might feel after a long day of work, running errands and taking care of the kids.  I’m talking about the kind of fatigue that makes you feel like you’re moving through water, that makes it difficult to focus and that leaves you feeling apathetic and unmotivated. Mind-numbing fatigue.

If you’ve been struggling with fatigue from thyroid or adrenal dysfunction for any amount of time, I would put good money on it that you’re dealing with at least a few food sensitivities.  In fact, food sensitivities (also called food intolerances), are one of the most common underlying causes of fatigue so it’s absolutely worth identifying and removing these hidden food sensitivities from your diet if you want to regain your energy for good.

What Are Food Sensitivities?

Now, if you’re thinking you’re off the hook because you’re not allergic to any foods, I’ve got news for you.  Food sensitivities are not the same as food allergies.

Food allergies represent a different type of immune response than a food sensitivity. Food allergies usually elicit a swift, and often severe reaction, including anaphylactic shock and death in some cases. Signs of food sensitivities, on the other hand, don’t show up as swiftly, or as severely (although they can be quite severe in their own way), making it much more difficult to connect the symptoms with the offending food which is causing it.

Unlike food allergies, the signs of food sensitivities are also much more broad- and thus more difficult to connect with a food intolerance.  Food sensitivities can lead to some serious health problems, including mental health disorders such as schizophrenia and bipolar disorder, but generally, they are much more mundane and include things, such as:

​These symptoms of food allergies can run the gamut from common to bizarre, from mild to severe and can affect virtually any part of your physiology: the gut, the brain, the thyroid, the liver, the skin, and on and on.

In her book The GAPS Guide, author Baden Lashkov details her recovery from severe mental health disorders which left her so debilitated, she found herself homeless and unable to work.  Her mysterious symptoms completely abated when she eliminated foods she was sensitivity to, including lentils (they left her weak, and unable to lift her hands  or to stand up), and chocolate (which made her feel overwhelmed and seized with “violent energy”).

While this may not be the typical reaction to food sensitivities, it does illustrate just how food can impact our health and what can happen when we consume foods which are a mismatch for our biology. In fact, I’ve read of numerous testimonies of people who were able to overcome a host of health issues simply by removing the foods they were sensitive to.

How Do I Identify (and Eliminate) My Food Sensitivities?

The key to ditching fatigue and supporting your thyroid and adrenals lies in removing the triggers that are causing it in the first place.  If food sensitivities are one of those underlying causes of fatigue, you’re going to have to remove the offending foods in order to feel your best (no, you can’t just drink more coffee). But how do you know which foods you are reacting to?  In order to solve that mystery, you’ve got two options.

​The first one is having a Food Sensitivity Test done.  This entails having blood drawn and testing your antibodies against certain foods to see which ones cause a reaction.  While most convention doctors don’t generally do food sensitivity testing, a functional medicine practitioner can easily perform this test for you at a cost of around $200 to $400, depending on the type of test done.

​There are some important things to consider, however, before opting to do food sensitivity testing:  First of all, food sensitivity testing is widely known to be inaccurate. False negatives happen all the time- and considering you may have just shelled out several hundred dollars for a test that missed a particular intolerance? Well, that’s a lot of money to waste, in my opinion.

​However, I think food sensitivity testing may be appropriate for some people.  If you’re a “see it to believe it” type of person, you just might need to see it there in black and white before you’ll realize that food sensitivities are indeed troubling you.

​If you do opt for food sensitivity testing, think of it as a good starting point- but realize that there may be some inaccuracies and the only way to really know for sure is to do an elimination diet.

The Elimination Diet- Your Best Bet for Eliminating Food Sensitivities?

​Since food sensitivity testing may not give you accurate results, how can you pinpoint your intolerances?  Your best bet is an elimination diet- a diet which removes the top inflammatory foods and allows the body to reset and heal.

​During the preliminary phase, you will eliminate a laundry list of foods which could be contributing to your fatigue, joint pain and other symptoms. There are a few different elimination diets around, but one of the most popular for women struggling with thyroid dysfunction is the Autoimmune Paleo Protocol (AIP).

The AIP Protocol is based on the paleo diet, which entails consuming a hunter-gatherer diet that our ancestors subsisted on for thousands of generations (and thus is the best dietary match for our biochemistry).  The Autoimmune Protocol, however, eliminates not only grains, legumes, sugar and dairy products, but also eliminates nightshade vegetables, eggs, chocolate, and coffee, which are all highly implicated in food sensitivities.

If you’re thinking that following such a restricted diet sounds tough, you’re right. But not as tough as living with constant fatigue, joint pain, gas and bloating, brain fog, migraines and any other of the number of symptoms that are associated with foods sensitivities.

When I first began an elimination diet, I felt pretty overwhelmed with the major overhaul I needed to make to my diet.  But I knew deep down that it was the answer to recovering from the debilitating autoimmune disease that was crippling my life. So I bit the bullet and did what I had to do.

And I was astounded at how much better I felt.  The mind-numbing fatigue, depression, brain fog, joint pain, mouth sores and digestive issues I had struggled with for years disappeared and I felt amazing.  I often say I felt like a completely different person, and while that’s totally true, I think a more accurate way to say it, is that I felt like Me again, which was something I hadn’t experienced in so long, I had forgotten what it was like to feel good. While transitioning the AIP diet was a bit tough, it was absolutely worth it.

Since then I've learned that the key to successfully undertaking an elimination diet lies in a few important mindset principles.  Here's what I think it's essential to understand in order to have your own success with the AIP:

Keys to Succeeding with the Autoimmune Paleo Protocol (AIP)

When you arm yourself with the right approach, an elimination diet can truly be a game-changer in terms of resetting your energy levels and finally ditching fatigue, brain fog, and weight gain. By addressing the underlying cause of fatigue and hormone imbalance, you can get your energy back- and keep it that way for the long haul.