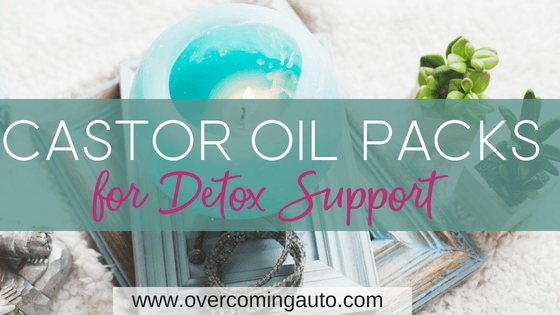 This article is Part 2 of a series on Spring Detox Protocols for Liver and Thyroid function.

In Part 1, we discussed why spring is traditionally held as the best season to support the liver with a gentle detox protocol, how to eliminate toxins that tax the liver and which foods support liver function.

In Part 2, we will discuss detox support protocols that go beyond the diet. Castor oil packs can help to improve the function of the liver and the release of toxins.  They have the added benefit of promoting rest and relaxation because they force you to slow down and focus on self-care. Let's dive in!

One of the hallmark signs of hormone imbalance is, ahem, moodiness.  Call it PMS, or something else, it's a well established fact that when your hormones are raging, your mood just might be raging too.

Which is actually kind of unfair.  More often than not, mood issues have their root in nutrient deficiencies, poor gut health, neurotransmitter deficiencies, or imbalanced hormones. In other words, while most people blame irritability, depression, anxiety and other mood disorders on poor choices and wrong thinking, it may have more to do with a physical imbalance in the body.

At the same time, mood issues can go both ways.  When you do give in to feelings of anger, unforgiveness or overwhelm, these toxic emotions can manifest as illness in the body.

Did you know that, according to Traditional Chinese Medicine, anger and irritability are considered signs of poor liver function, along with other signs such as a perpetually red, flushed face or a vertical crease between the eyebrows?

So while you are working on cleaning up your diet to support detoxification, it’s also a good time to address any unresolved emotional issues.  I love to spend the first part of my day in spiritual contemplation. Prayer, meditation, journaling and reflection are all ways to bring up and process hidden stressors that may be draining you emotionally.  Can you any patterns of unresolved emotional tension that may be contributing to your fatigue?

Healing begins with the mind, so make sure to address any emotional stress in your life before it has chance to negatively impact your physical well-being. Easier said than done, I know, but it's worth it!

Other detox support methods can also help to pull toxins out of the tissues and draw out deep seated emotions, such as anger. Castor oils packs are one such detox method.  A castor oil pack entails placing a heated flannel cloth soaked with castor oil over the abdomen and allowing the castor oil to penetrate while you relax for 30 minutes to an hour.

Castor oil packs can benefit the detox process in a number of ways.  They stimulate drainage of the lymphatic system, which is responsible for removing toxic buildup from the body.  Castor oil packs are also thought to improve digestion by stimulating elimination.

Finally, castor oil packs have been shown to have a normalizing effect on liver enzymes and to improve energy levels. Keep reading to find out what you will need as well as a step-by-step guide to applying the castor oil pack.

What You Will Need

How to Use a Castor Oil Pack